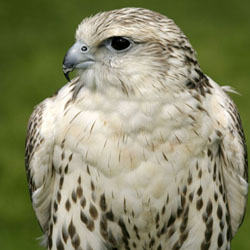 Parrots are prey animals which means that other predators in the wild, such as hawks or snakes, are looking to make them into a meal.  This one factor influences parrots behavior in captivity more than any other.

Parrots are most vulnerable when feeding on the ground; membership in a flock plays an important function in ensuring their safety and improving their odds of survival from attacks by predators.   The most common predators of parrots include:

Some predators pose risks only during the day while others are night stalkers (owls, bats).

As prey animals, parrots are on constant alert for danger and they instinctively react (fight or flight response) to perceived threats.  Their first choice is to escape (flight) however, if this is not possible, they will attack (fight) with their powerful beaks to defend themselves.

Because their most threatening opponent is the hawk, parrots are especially reactive to quick movements from above and behind.   For this reason, it is wise to avoid quick, sudden movements near your bird.  This is  a built-in instinctual reaction not subject to logic or reason.   Simple and relatively innocuous household objects can illicit extreme fear responses in a bird.   For example, a helium balloon may represent a hawk or a vacuum hose may equate to a snake in your bird's mind.

Prey animals are genetically designed to be very visual and their eyes are well tuned to help detect threatening movement from quite a distance.  For more information on avian sensory perception, refer to our related article Avian Senses and Survival.

As prey animals, parrots are often suspicious or threatened by exposure to new household items or strangers.  It is important to expose your bird to  non-threatening experiences and changes starting at a very young age to build flexibility and enhance their adaptability.  Variations in diet and toys, travel, and  exposure to new people and places all help to make your bird more flexible and adaptable to change.