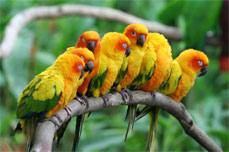 Parrots are flock animals.   Some parrots flock in single species flocks (i.e., African Greys) and other birds operate within mixed species flocks (i.e., Amazons, Conures and Macaws).  Different species can have different social needs and behaviors as necessary for them to survive in their specific habitat.   Flock size can range from a few to several hundred birds.  Flock size can also vary throughout the day depending on the activity.  For example, flocks may break into smaller groups for foraging and then recombine at night into larger roosting communities.

For prey animals, living within the context of a flock is often necessary for survival.  A parrot  derives it's greatest sense of physical and emotional security from living within a flock.  Parrots are rarely alone in the wild.  A parrot's survival instincts tells them that they are unsafe when they are alone.   A single parrot in the wild is likely a bird who is going to die because of injury, illness or old age and who has been abandoned by the flock because he presents a risk to their safety.

Flocks travel, eat, play and roost together. It is very difficult for a lone bird to simultaneously forage and watch for predators.    While the flock participates in group feeding activities there are many sentinels with their eyes on the lookout for predators and at the ready to warn their flock mates.

Common predators of parrots in the wild are hawks, eagles, owls, monkeys, snakes and bats.    By far, hawks present the greatest danger due to their ability to swoop down on  a parrot at speeds approaching 200 miles per hour.   However, it is much harder and confusing for a predator to single out and attack an individual bird when it is moving as part of a group of birds.

A typical daily schedule for a flock of parrot's looks like:

Besides security, living as part of a flock offers many benefits including opportunities for:

Parrots have well developed communication skills and use many vocalizations to communicate with their flock.  Parrots use vocalizations to greet and acknowledge each other and provide warnings if necessary.   Their natural ability to "learn" our language and interact vocally is one of our parrots most enduring traits.

Because of their instinctual need to be part of a flock, parrots love to be included in the day to day activities of their human flock to the extent practicable and safe.   Including parrots in activities such as meals, showers or TV time will give them a stronger sense of belonging.

Meeting the Instinctual Needs of Parrots
Regardless of the...

Parrots and Predators
Parrots are prey...