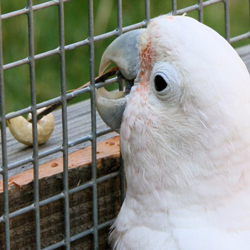 Scientists often refer to the use of tools as an indicator of intelligence within a species.   Tools are defined as objects, other than a part of a bird's body, that are used for a useful purpose.     Tool usage is an indicator of a species ability for inventive problem solving,  flexibility of mind and their ability to learn and adapt.

There have been many reports of tool usage by various species of birds.   Darwin observed a finch in the Galapagos that fashioned a tool out of a twig to retrieve insects or larvae embedded inside branches.  Crows in Japan commonly either place nuts under the tires of parked cars and return once the nuts are cracked or they position themselves on wires over a busy intersection and drop the nuts so that passing cars will crack them open.

There have been instances of tool usage reported in parrots as well.  For example:

A Parrot's Need for Mental Stimulation
In the wild, parrots...

The Amazing Bird Brain
In the old days,...