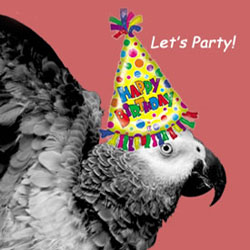 A flock of naughty and extremely bored parrots (including one named Mr. Peabody) decided to throw a party while their parronts were off to work one day. The ringleader, a very mechanically inclined Triton Cockatoo, broke everyone out of their cages and the party began. The parrots jointly decided to create their own enrichment activities and to play some fun, competitive games. No two parrots were of the same species and they each won a different game. From the following clues can you determine each bird's name, its species and what game they won?

1. Boo Boo and the parrot who won "Bite the Tail of the Puppy" (who wasn't the Quaker) had a blast all day!
2. The winner of the "Food Flinging Contest" and the African Grey (who wasn't named Jo Jo Bean) decided they should make partying a regular event.
3. Neither Boo Boo nor the bird who won "Chew the legs off of the dining room chairs" was the Quaker Parrot.
4. The Eclectus and the champion food flinger both hoped they wouldn't get in too much trouble when their parronts got home.
5. Kermit (who isn't the Quaker) and the champion chewer particularly enjoyed eating all of the party treats that the entire gang found while foraging through the kitchen cabinets and the pantry.
6. Neither Boo Boo nor Jo Jo Bean won the "people food" foraging contest.