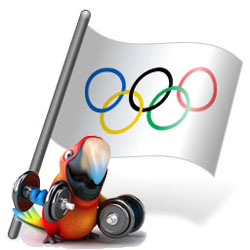 Five very talented parrots from different parts of the world (not necessarily native) were chosen to participate in the Parrot Olympics. From the clues provided, determine each owners name, parrot species, Olympic event and nationality.

1) Ms. Evans is the proud parent of the weight lifter (ABC Barbell category) who is not the Quaker parrot.

2) The cockatoo who is from Japan is not owned by Mr. Hall nor does Mr. Hall own the Pionus.

3) The Caique who specializes in the high jump, has a daily training regimen that includes jumping from perch to perch in his cage. The gymnast who excels in hanging and spinning from the rings is from Russia.

4) Ms. Barker who is from Australia does not own the African Grey or Quaker parrot (neither of which is owned by a man).

5) The Pionus does not run Cross Country. The African Grey is not from the UK.