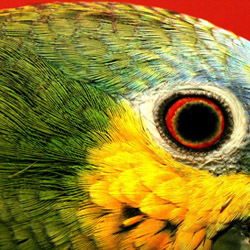 Vision is a parrot's most critical sense as it is important for their ability to survive. It is typical for prey animals to have their eyes spaced widely on their head and this is the case for parrots. With their eyes placed on the side of their heads, they are better able to monitor movement from all angles and they have close to 360° view. A few other interesting facts about a parrot's eyesight are:

Do They Hear What I Hear?

The ability to hear is very important to a bird's existence in the wild, especially since they often rely on communications between flock members to warn of predators. Here's a few facts:

For many years, birds were considered to have a poorly developed sense of smell. Recent research has rejected that hypothesis. Although there haven't been parrot specific studies in regards to their olfactory abilities, it has been documented that the sense of smell is critical to many other species for routine tasks such as navigation, foraging and mating.

How Discerning is a Parrot's Palette?

Compared to humans, a parrot's sense of taste is very limited but as we all know, they do have definite likes and dislikes.

A bird's skin has sensory nerve endings that detect temperature, pressure and pain.

Parrots and Predators
Parrots are prey...