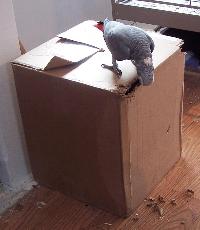 I recently received a large box of toy making supplies.   I didn't have time to put the toy parts away in the craft room and left the box in the dining room, next to one of the bird cages. I let the parrots out for the evening and it didn't take Zorba long to notice something new in his area. I looked over to see him standing on the box chewing away to get at whatever was inside. My first instinct was to put the box away, when I realized this was a new activity for him and there was no reason he couldn't chew on the box as it contained parrot toy parts meant for him anyway.

Zorba loves to chew on boxes, but I had never given him a large box before. This box served as a play stand and chew toy all in one. For the next three days, whenever he was out of the cage, Zorba would spend time intermittently chewing at the box, eventually chewing a hole in the top that was large enough to start pulling out baskets and vine balls.

Buddy's Beer Carrier
As I was getting...

Recycled Boxes
I can't believe I...